Today we fly from Costa Rica to Toronto..then Toronto to Ottawa!!

There comes a day in the lives of many Canadians where they either yearn for or discover the WINTER VACATION.  I was in my late teens when I first started going on trips to Florida and Mexico.  For a period of time when I was raising my children and involved in other aspects of life this activity was curtailed.  When my girls were in their teens this blessed (I use the term loosely) activity was resurrected.  Since then we have managed to sneak off to Florida, Mexico (numerous times), Cuba, Dominican Republic, Jamaica, British Virgin Islands, St. Martin (twice), Saba and Costa Rica.  Mexico is definitely my ‘go to’ place when looking for a quick get away.  I love Mexico and still haven’t found another country that presents the vitality and beauty this country has to offer.

Pictured below – the reason I travel.  Today is the last day of a 3 day POLAR VORTEX.  A Polar Vortex freezes your nose hairs, hurts your lungs when you breath and the moment you walk outside it makes you feel like you’ve been popped into one of those freeze dry machines.  Over this past weekend our ‘low’ was around -28 c with wind chills between -38 to -40c.  Click here for the real definition of Polar Vortex.

This is the reason Canadians go on Winter Vacation.  This is the reason that Canadians can live happily through daily temps ranging from zero c to -20 c for months at a time because one 3 day weekend of Polar Vortex weather makes ya strong, builds character and generally numbs you into the realization that we shall survive whatever Mother Nature has to offer. 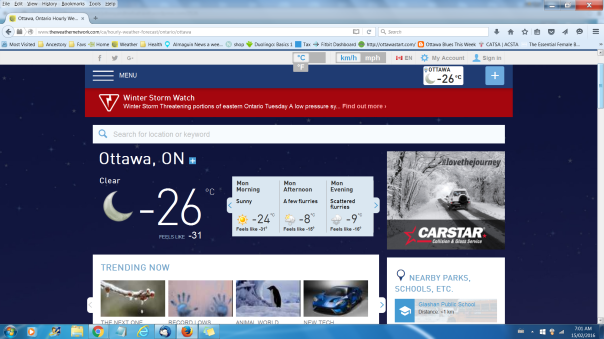 And So We Begin 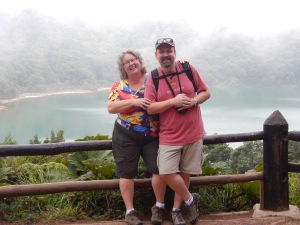 For us travel can be as simple as a Sunday drive or as complicated as an attempt to climb Mt Fuji in Japan (which by the way Johnny achieved and Melva didn’t).

Ensign Harry Kim: I think it’s safe to say that… no one on this crew has been more… obsessed with getting home than I have. But… when I think about… everything we’ve been through together – maybe it’s not the destination that matters. Maybe it’s the journey. If that journey takes a little longer, so we can do something we all believe in, I can’t think of any place I’d rather be, or any people I’d rather be with.
Tom Paris: To the journey.
Chakotay: Hear, hear.
All: To the journey.

Of course, it was some while later I realized that Ralph Waldo Emmerson may have coined a similar quote “Life is a journey, not a destination.” 🙂

And so we begin……..Earth: the only frontier. These are the travels of the Melva and the Johnny. Their multi-year mission: to explore strange new lands, to seek out new lifestyles and new civilizations, to boldly go where many a man (and woman) has gone before…..Earthdate February 27, 2015

Johnny took these photos from atop Mt Fuji in Japan as I languished in a hut at 7th Station. 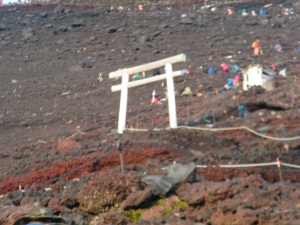 COSTA RICA March 2014 – Next photo gallery is whitewater Rafting in the Balsa River, Costa Rica.  Our first time rafting, and it was only a Class II/III, adventurous none the less!  Johnny and I spent 17 days in Costa Rica.  For 14 days we rented a little cabina just a few blocks from the shores of Lake Arenal in the pueblo of San Luis, just outside of Tilaran.  This side of Lake Arenal is a little less populated (by tourists) a very quiet.  The cabina was only $600 for the 2 weeks and it was a great base camp to go off and see the sights.  During that two weeks we spent one night at Tabacon Grand Spa Thermal Resort a hot spring hotel in La Fortuna near the base of Volcano Arenal.  The hot springs are amazing.  While in Fortuna we also went ATVing in the area of Volcano Arenal.  I’m a bit wreckless and when hot dogging it I accidental got thrown off the ATV and it flipped over on top of me.  Very luckily, I only suffered a sore shoulder for about um..6 months 🙂  My next ATV ride will be a bit more sedate!

We took two days away from San Luis and headed to the Pacific Coast, a little village called Montezuma on the Nicoya Peninsula where we stayed at the cutest little hotel I’ve ever been to.  Love it!  Ylang Ylang Beach Resort.  The hotel is only accessible by foot or by the hotel’s vehicle that goes along the beach to reach the hotel.  The setting was awesome, the food very very nice.  We could have stayed longer!  Montezuma  itself is a bit of an old hippy haven, not really my style of place but the surroundings are well worth the visit!

ATVing at the base of Volcano Arenal

View from our room.

View to beach from our Dome #1

Artwork on walls of Dome #1

Casado – typical Costa Rican dish..love it! Ate it as often as I could.

View of Lake Arenal as you are driving into San Luis

View from our room at Tabacon Thermal Resort & Hotspring Hotel

On the way to Poas

Renting a car for our entire Costa Rica trip was the smartest thing we did.  It enabled us to go wherever we wanted, whenever we wanted.  Johnny and I love ‘backroading’ and spent a good deal of time on narrow dusty, bump roads in the mountains (big hills) enjoying some incredibly scenery and seeing Costa Rican life from the inside.  Our drive to Monteverde was our first major dirt road drive and well worth it!  I’m from the Near North of Ontario Canada and quite accustomed to driving the dirt roads, so I got to drive, Johnny navigate!