The last couple of days were quiet.  Walks on the beach, sunning, swimming, dinner out both Thursday and Friday (had enough hotel food 🙂 . . …Once I get home I will do a recap of the holiday, my thoughts about the area we stayed in, the hotel we stayed in….my overall concept of DR.

Sitting in the lobby waiting for the shuttle trying to upload my photos from the past couple of days (great early morning shots) …. connection doesn’t seem strong enough *sigh* ……flight at 12:40 ….landing around 4:40 – should be home by 5:30/6:00 ….BRRRRR no coats, it will be about -12c plus wind chill and  we have sandals on LOL….we are Canadian and Norwegian – we CAN DO IT!  Check back for the photos – may have to wait until I’m home to upload them!

The Beach in Bavaro (just outside of Punta Cana proper) is incredibly long…..I tried to google exactly how long but can’t seem to find it….at least 10 k and probably much further.  At high tide it’s just minorly soft but most of the time it’s the hard flatter type of beach perfect for walking/running.  The water although beautiful isn’t that clear clear type but for the most part it’s rock and coral free close to shore and the only impediment to swimming is a bit of sea grass in the occasional place.

As you strong along you pass myriads of hotels, condo buildings, beach ‘guys’ trying to get you to take a tour or go visit a local vendor, beach ‘gals’ offering to braid your hair or give you massages.  Unlike Mexico there are very few people selling tourist stuff along this beach.  I think I’ve only seen one fellow who is actually selling selfie sticks….smart guy, huh?  There is also a guy who sells ice cream from a cooler – go figure!

My photos today are ‘things we saw while walking along the beach’….one VERY elaborate sand creation featuring a man and a woman who were being attacked by a shark – amazing detail….done by a true artist…some of it had eroded a bit by the time we saw it.  Another lovely little medieval village, a foot print (not ours).  Unfortunately, the one huge issue with this beach as with many beaches around the word is that with rising sea levels there are areas with massive erosion.  The area called El Cortecito is particularly hard hit with the small stores along the shore being destroyed.  Some of the older hotels were built closer to the water and their beaches have all but disappeared.  I talked to a young local fellow ‘Luigi’ and he pointed about 20 feet out from the current ‘edge’ to where someone was swimming and told me that not so long ago that was the edge of the beach and that in 6 months he thought that where we were sitting would be ‘taken’ by the sea.

As you walk along in some areas you see palm tree roots where once it was solid ground, big palm with their base ‘ball’ partially exposed, in one section there are a series of large covered berms that have been erected to stop the waves from crashing in and further eroding the beach.  This is a serious problem.  The rising sea levels are said to be caused by global warming.  Global warming of course said to be caused by what we are doing to our planet.  How does it stop?  Consumerism at it’s worst 😦   Of course, there is another side to this.  The earth has been moving and shifting forever (I’m assuming almost infinity here 🙂 …..continents always shifting, water levels rising and lowering, ice ages, meteor crashes causing catastrophic conditions ……

The beach also changes from day to day in different sections.  There is sargassum – not huge amounts and most hotels keep it raked up, one day there was all this bright green stuff that I had never seen before, but only one day so far.  Some days there are almost pine needle looking things being washed in.  Mostly, it’s clear and most evident in the early morning or at higher tides.  The sargassum I know is a product of the higher, warmer oceans, the others are just typical of a beach that has winds and surf.

Amazing what a beach walk can make one think about . . . .it’s not all about pretty sunsets is it?

most of these photos (not all) were taken on our first beach walk of 2017 on New Year’s Day before the workers had come out to rake. 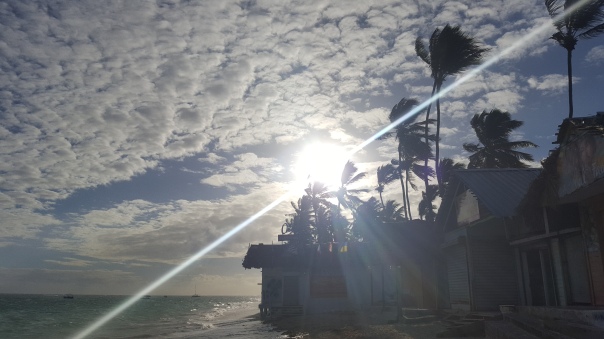 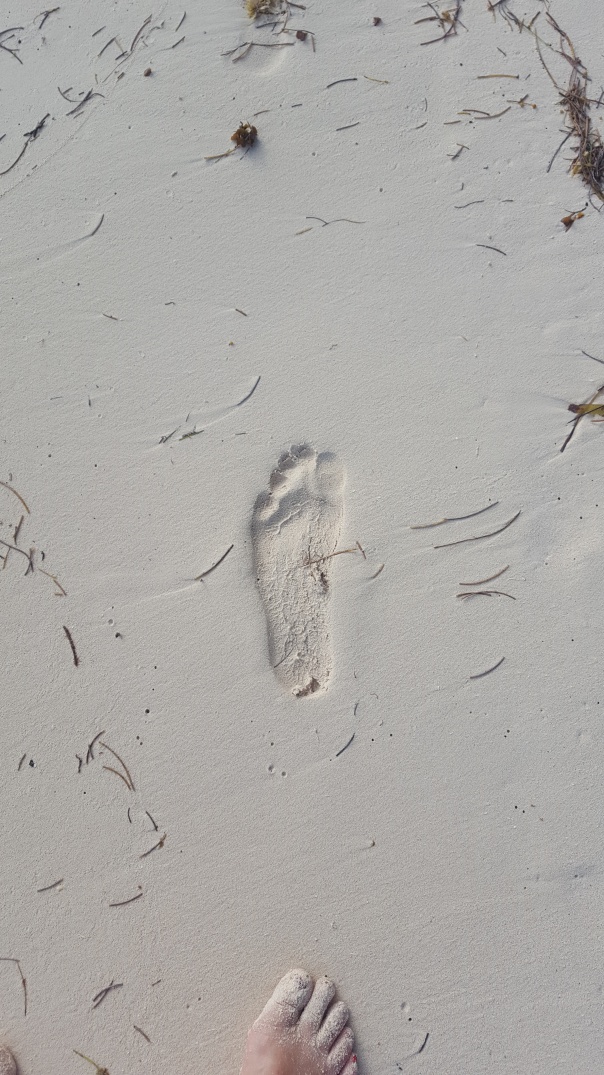 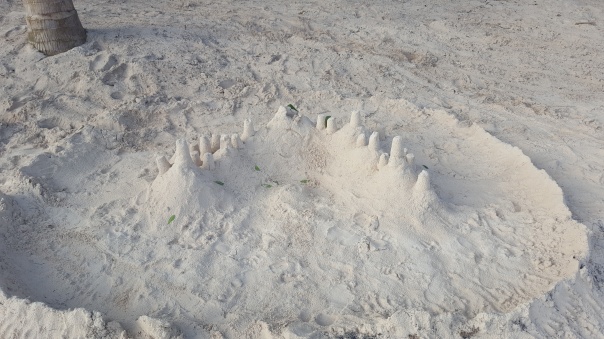 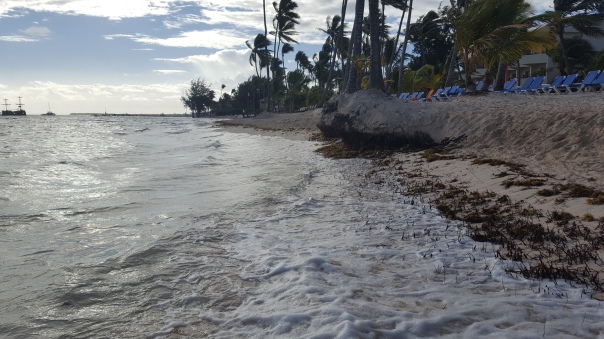 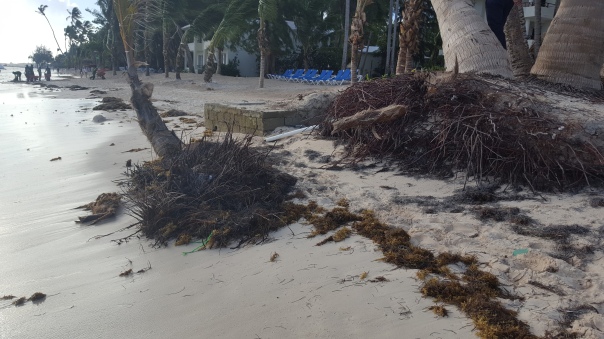 We like to call this the Great Wall of Steven 🙂 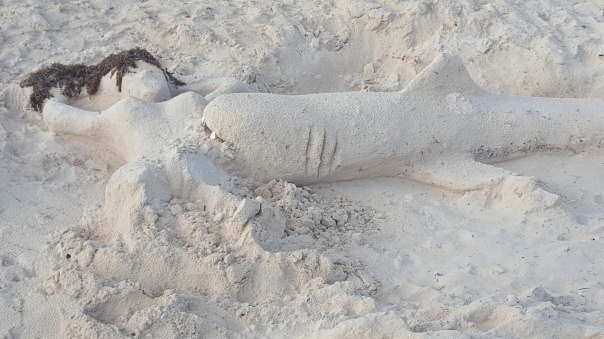 Oh man…..the time is flying……please MAKE IT STOP 🙂 ! We are really liking Ambergris Caye as much for its walkability and for it’s laid back lifestylen as for it’s somewhat off the beaten path location. It’s a very simple place, no fancy places to sell the tourists jewels and designer clothing. To some degree I believe it’s a community before it is a tourist destination. Oh sure, there are a ton of hotels and touristy things to do, but the difference is that the people who come here seem to be real people who want to travel to real places. To say it is totally our type of place would be an understatement. It’s just the right fit! The weather has been far from stellar from a ‘beach’ vacation point of view….but that’s ok with us….we prefer it a bit cooler so that I have the energy to wander about. As much as we mostly vacation in hot places….I don’t actually function well in heat and humidity. Of course, we are going snorkelling tomorrow today (Day 9) so I might be wishing it was sunny and warmer then 🙂

Day 8…..we wandered south of the hotel….walked for about two hours – more like a mosey (no clue how one spells that 🙂 We went the road for about 50 minutes. There were a few restaurants but all closed. The need to use ‘facilities’ arose and we wandered into a condo hotel where they were quite gracious and allowed the use of their facilities. On the way back we took the beach. You can walk for miles and miles and miles along the beach here. I may have mentioned it’s not traditional beach ….. in order to stop erosion they have man made breakwaters built up with in-filled flat beach. What we really noticed is that it is all very quiet…doesn’t seem like a lot of guests….not all the noisy smoking, drunken touristas you find at an all inclusive….soooooo calm and peaceful sigh of happiness……yet another need to ‘stop’ and again, the condo hotel more than happily allowed the use…..we got a coke and sat at the bar…..all friendly, all welcoming.

The rest of the afternoon we hung out on the beach sipping sweet drinks and eating amazing chicken nachos. A bit later we walked into town (again, about 3 km away) and headed to the restaurant we had tried to go to the night before – Elvies. It is a nice restaurant on the middle street…..sand floor….nice decor, a guitar player and the food was good….but in the end, I’m thinking it was more touristy than we tend to like. We love hole in the wall not ‘the place you have to be’ places best! So, it was good….there was a degree of ambience….it was the most expensive meal to date (171 BZD) (85.50 US) and I wouldn’t hurry back 🙂 Give me tacos on the beach any day of the week! 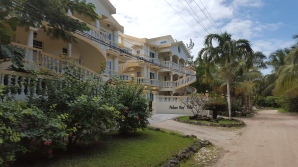 By the time dinner was over we were soooo tired we jumped in a cab and headed back to the hotel where our rituals always to read for a while then head off to Belizian slumber land. 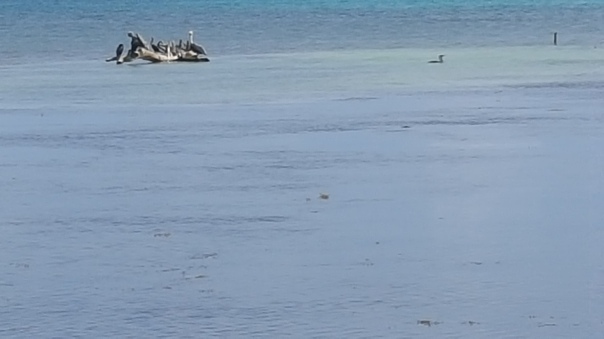 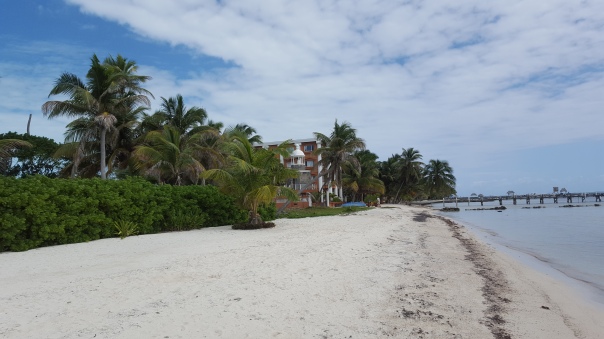